Using Behavioural Economics to better understand people’s decision-making provides for better design, implementation and targeting of public policy. The material below is intended to provide a source for discussion and reference in Ireland. It contains links to academic papers as well as real-world applications of behavioural economics to policy issues in Ireland and abroad. We are currently holding regular network events in Ireland to explore the potential of this research in the Irish context (see here for details).

The Behavioural Insights Team (BIT) worked with the DVLA to test the efficacy of different messages upon individuals who fail to tax their vehicles. The BIT tested the original DVLA letter against a new letter with simpler, harder-hitting messages (such as ‘Pay Your Tax or Lose Your [Make of Vehicle]’) and an image of the owners vehicle. It is thought that the image would attract the attention of recipients and make the idea of losing their vehicle more salient. This image also involves a strong element of personalization, as drivers are shown an image of their own car. The results revealed that overall, sending letters to non-payers of road tax with a picture of the offending vehicle on the letter increased payment rates from 40 percent to 49 percent.

The authors describe two large scale field experiments in the UK conducted in 2011 and 2012 using a subject pool of more than 100,000 individuals in each of the experiments. In the first experiment, the authors test two fairness and three normative messages which are added to the standard reminder letter for late payment of taxes. The authors report the largest effect for a normative message (‘Nine out of ten people in the UK pay their tax on time. You are currently in the very small minority of people who have not paid us yet.’). People in this treatment group were 5.1% more likely to make a payment towards their debts within 23 days after receiving the reminder letter compared to the control group.

The second experiment is implemented the same way and tests for the psychological distance of normative messages as well as the effect of descriptive and injunctive norms. General descriptive norms were shown to have a larger effect compared to general injunctive norms. The psychological distance or the normative messages was varied by describing the behaviour of others in the same region (‘The great majority of people in your local area pay their taxes on time.’) or in a similar situation (‘Most people with a debt like yours have paid it by now.’). More specific norms were shown to have a larger effect. The authors argue that because including normative messages in the reminder letters is relatively cheap, also small effects can be cost effective.

The HMRC Behaviour Change Team are engaged in a series of randomised controlled trials. The first of these tested the influence of social norms on tax debt payments. 17 Letters were sent to 140,000 taxpayers, and took four forms. The first was the standard letter with no mention of social norms (the control group), the remaining three all contained the statement ‘9 out of 10 people pay their tax on time’ in the context of either Britain as a whole, for the taxpayers’ postcode, or taxpayers’ home town. The interventions appeared to be successful: 67.5 per cent made payments in the control group; 72.5 per cent for national social norms; 79 per cent for postcode social norms and, finally, 83 per cent for home town social norms. It is estimated in the report that the difference between the standard letter and the highest performing home town social norm letter (15 per cent) could advance £160 million of tax debts to HMRC over a six-week period.

The impact of personalised text messaging on fine repayments, BIT (2012).

The Courts Service and the Behavioural Insights Team wanted to test whether or not sending text messages to people who had failed to pay their court fines would encourage them to pay prior to a bailiff being sent to their homes. In the initial trial, individuals were randomly allocated to five different groups. Some were sent no text message (control group), while others (intervention groups) were sent either a standard reminder text or a more personalised message (including the name of the recipient, the amount owed, or both). The trial showed that text message prompts can be highly effective, 28.2% of the standard text recipients paid the fine whereas 33% of the recipients of the standard text with personalisation paid the fine. 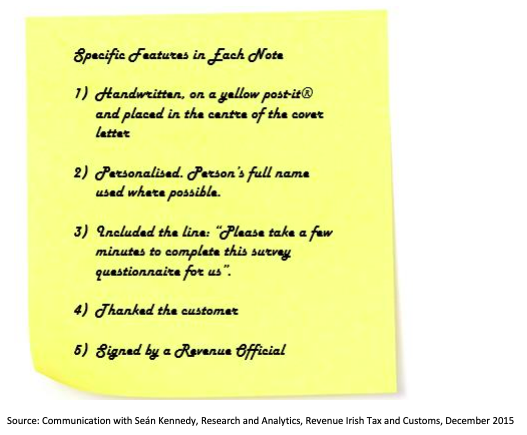 Increasing Responses to the SME Survey (2013) Department: Office of the Revenue Commissioners.

The Revenue tested the impact of personalisation on increasing survey responses to the SME Survey. From a sample of 2000 business customers, 15% were randomly assigned to a treatment group and received a handwritten Post-it note attached to their survey pack requesting they complete the survey; the control group received surveys only. After 15 days, response rates were nearly doubled in the treatment group and the intervention had an overall effect of seventeen percentage points

When attempting to improve survey data, three issues are important: response rate, representativeness and item-response. This study examines effects of including a scratch lottery ticket in the invitation to a survey letter. Questionnaires concerning oral health were mailed to a random sample of 2,400 adults. A systematically selected half of the sample (1,200 adults) received a questionnaire including a scratch lottery ticket. One reminder without the incentive was sent. The lottery ticket incentive increased the response rate and improved representativeness by reaching more respondents with lower education. Furthermore, it reduced item-nonresponse. The initial incentive had no effect on the propensity to respond after the reminder.

This field experiment compared the effects of descriptive and injunctive norm-based persuasive messages on the response rates of online surveys. They also investigate the influence of email reminders on response rates. Participants in an interdisciplinary conference were assigned to one of four groups. The three experimental groups received one of the following messages asking them to complete an online survey that highlighted: (1) a descriptive social norm indicating typical response rates among attendees of prior similar conferences; (2) an injunctive norm appealing them to join fellow participants in completing the survey; or (3) both social norms. The control group received a generic request to complete the online survey without any norm based appeals. The participants receiving a message highlighting the descriptive social norm were more likely to complete an online survey compared to all other groups. Additionally, one and two email reminders were found to be effective in improving response rates of online surveys.

A review conducted by the SEAI identified possible interventions suitable for the Irish energy market. Providing households with feedback on their energy use through in-house displays is likely to lead to savings of up to 3%. Encouraging households to set realistic energy goals and publicly commit to them could reduce electricity use by approx 10% in the short term. Financial incentives may encourage some households to reduce their energy use but can produce negative effects when offered to people who would have been willing to save anyway.

In The Netherlands, the Ministry of Infrastructure and Environment has implemented the “Optimizing Use” project. In this context, national and regional governments and businesses collaborated to improve road, waterway and railway accessibility to reduce traffic congestion in the busiest regions. The project comprised behavioural measures, such as increasing the number of bicycle shelters at stations. This is an example of a measure addressing a barrier to cycling (i.e. availability of sufficient secure cycle parking) through a change to the choice architecture. This is in clear contrast with monetary incentives to promote sustainable transport like granting “eco vouchers” for buying green products, such as a bicycle or train tickets.

In 2013, SITRA and the Finish City of Jyväskylä launched the “Towards Resource Wisdom” project, which aims at developing an operating model for regional resource efficiency. In spring 2015, the model was piloted in Forssa, Lappeenranta and Turku and, in June 2015, a network was created to support Finnish cities in making their regional activities carbon neutral and waste free. A set of indicators was also developed to measure progress towards these goals. As part of the Resource Wisdom project, a series of pilots were conducted, one such example is the “Bus Leap Project” aimed at increasing the use of public transport and reducing carbon emissions and fuel consumption. The project taps on behavioural levers such as simplification – i.e. development of a route guidance system to assist residents with basic logistic information – and is testing whether introducing staggered working hours would have an effect on decreasing periods of high traffic.

This paper evaluates a large-scale pilot program run by a company called OPOWER, to test the effects of mailing home energy use reports to residential utility consumers. The reports include energy conservation information as well as social comparisons between a household’s energy use and that of its neighbours. Using data from a randomized natural field experiment of 80,000 treatment and control households in Minnesota, it is estimated that the monthly program reduces energy consumption by 1.9 to 2.0 percent relative to baseline.  To prevent a “boomerang effect” which might cause those better than the norm to regress, the Social Comparison Module adds injunctive messages labelling low- and moderate-consumption households as “Great” and “Good” and adds “smiley face” emoticons.

Where calorie information is placed on menus influences how much people order and eat. Consumers were given different lunch menus at random. Some menus had no calorie information, some had calories displayed to the right of the price and some to the left. The effect depended on exactly where the calories were shown.  The largest impact was recorded when calorie labels were displayed just to the right of the price, in the same font and at the same size. This resulted in a 19% drop in the calories consumers ordered for lunch and a 37% reduction in the calories they ate. Displaying calories was found to have no effect on consumer’s enjoyment of their food, with the level of satisfaction similar across all three menus.

Increasing the number of organ donors in the United Kingdom (BIT)

This trial involved eight variants of the NHS Donor Register webpage when people were renewing their vehicle tax or applying for a driver’s license to test which would be the most effective at encouraging organ donation. The nudges tested were: social norms, visual cues, loss and gain framing, reciprocity and call to action. All interventions except the combination of social norms and a visual cue of a generic group photo were found to have a positive effect on organ donor registration. The reciprocity message “If you needed an organ transplant, would you have one? If so, please help others,” was found to be the most effective message. This results of the trial have informed subsequent messaging by the NHS with the reciprocity message being placed on the government webpage. This is estimated to have achieved 96,000 additional registrations in one year compared to the basic request.

GP practices who were identified as having a high prescribing rate were eligible for the study and assigned into two groups. The treatment group received a letter from England’s Chief Medical Office stating the practice was prescribing antibiotics than 80% of the practices in  its NHS Local Area Team. The control group received no communication. Over six months, the doctors in the treatment group reduced their antibiotic prescribing by 3.3%. The researchers estimate that this intervention created £92,356 savings in direct prescription costs for the public sector.

Applying Behavioural Science in Tax Administration – A Summary of Lessons Learned (The Revenue, 2017)

This report summarises the results and lessons learnt from 20 RCTs conducted from 2011-2017. The four key behavioural insights used were deterrence, simplification and salience, personalisation and social norms.

Thirteen examples of applications of behavioural policy are summarised in this paper, some of the projects are tested using randomised control trials, while others use behavioural findings or insights to inform delivery.